Not sticking with non-stick (Day 61)…

Almost everyone I know uses a non-stick frying pan in the kitchen. When it comes to stuff like omelettes and stir-fries, they seem to make the most sense. But they also make for an unintentional amuse-bouche of Teflon, which isn’t so yummy, unless you’ve cultivated a taste for carcinogens — and you know if pet budgies are dying from the perfluorinated fumes, it can’t be good.

What does this have to do with the environment and making green changes, you ask? Nothing much. I just take a sick pleasure in ruining people’s frittatas.

Kidding, of course. I’ve actually decided to put away my Teflon frying pan for good not because of how toxic it may be but because I’ve noticed it takes at least twice as long to heat up as my stainless steel one does. And, the more I’ve been using the latter, the more I’ve realized that it really doesn’t require more elbow grease to clean — occasionally a long soak is needed if I’ve burnt something (which, OK, is more than occasionally), but nothing gets stuck on forever. Plus it’s lighter and easier to handle than the non-stick pan, which I often need both hands to lift (and I work out!).

I think this change will be pretty easy to make, although I might want to look into poaching my eggs.

I’m now two months into my 12-month challenge and feeling pretty good, like maybe I could actually make it through another 300 days. However, there are only so many green products out there that I can switch to; eventually, I think I’ll be forced to make bigger and bigger changes, despite my initial intentions to take baby steps the entire way.

Let’s step into the confession booth for a second: So far, I’ve caved in once on the bottled water front. I found myself stranded at a movie theatre without my Nalgene and the management was offering free popcorn and Dasani (the worst of all the bottled waters, too). I hadn’t eaten dinner and couldn’t refuse free popcorn, but I also couldn’t ingest all that salt and starch without something to wash it down. I bowed my head in shame and grabbed a bottle. My friend graciously offered not to tell anyone, but I thought I’d be honest.

I also had some Australian shiraz the other night while at a restaurant, but only after I inquired about whether they had any Ontario wine (and they didn’t, because they have good taste). Sorry.

And, finally, I left the light on in my bathroom one day by accident, but I tried to make up for it by going about my bed-time ablutions in the dark. It was actually kind of fun … almost.

But more importantly, truly, are the successes: I’ve given away three batches of stuff via Freecycle, always to very friendly and appreciative folks; I’m generally more aware of everything I consume and discard, turn on and off, and how I travel to and fro. And there’s been so much positive response from friends, family and people I’ve never even met who read this blog — my friend Sarah has invested in a tote bag, my friend Melissa and fellow blogger Crunchy Chicken both said they were going to stop using paper towels in public washrooms, and my mom made sure the chocolate Easter egg she bought for me was organic and fair-trade. All this thrills me to no end.

If, however, I had to single out one change in the past couple months that’s accomplished the most with the least amount of effort — and that I would wholeheartedly recommend to everyone — it would without a doubt be the $6 collapsible nylon tote bag. Ever since I stuck it in my purse, I haven’t needed a single plastic bag (and normally I’d end up with at least a dozen stuffed under my sink every week between groceries and other random purchases).

I think things are going to get more difficult from here on, but now that I’m armed with tote bags, hankies and vegan floss, I feel ready for the tough stuff.

By the time I was finally done checking out all the booths and exhibitions at the Green Living Show this weekend, I felt a bit greened out. Maybe it was the overt consumerism and the throngs of people elbowing one another to get free samples of biodegradable vegetable wash and organic granola. Or maybe it was the fact that my media pass was not only made from recycled paper but attached to a shoelace proclaiming “I used to be a pop bottle!” Or it could have just been the occasional waft of body odour and wheatgrass. Either way, it was all a bit much.

However, what made the trip worthwhile (other than the complimentary bike tune-up — thanks, Duke’s!) was Margaret Atwood‘s interview with George Monbiot, the popular Guardian columnist and author of Heat. He appeared via LongPen from his home in Wales and was very articulate; it was nice to see an environmentalist so compelling and yet so rational. I learned why biofuel is far from being a green solution, how a trans-Atlantic flight negates in a couple seconds an entire lifetime of composting, recycling and solar panelling, and also why those who think it’s too late to try to stop global warming are just plain wrong.

Listening to him for one hour left me with plenty to ponder and was considerably more valuable than any product or brochure kit. Hence my next green change: to make sure I spend some part of each day educating myself about the environment. It might include reading a book like Heat, talking to the owner of a store like Grassroots, watching a documentary about corn, or just scanning all the green blogs. And no, shopping online for stylish tote bags does not count. 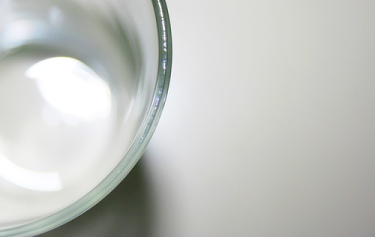 As Thistle reader E-Jay commented the other day, one of Oprah’s top 10 ways to go green on her show last week was to use the same drinking “vessel” (cup, glass, mug, thermos, bucket) each day for all beverages. Somehow, I doubt the big O herself actually sips her imported spring water from the same cup as her caramel macchiato, but still, it’s a good idea.

Of course, I have my principles when it comes to alcohol (the most important area to have principles, really), so there’s no way in hell I’m pouring a properly decanted bottle of wine into a mug with remnants of my morning coffee — plus, as I’ve already mentioned, I harbor an undying love for extra-fragile stemware. If you’re wondering where the “less class” part of the headline comes into play, it’s in the fact that I will be confined to using the same wine glass for both red, white and sparkling, which in my opinion is a major crime.

When it comes to non-alcoholic beverages, I’m going to make sure that I only use one glass every day for all my water, milk and juice. Because I mostly just stick to water, if I can stretch it to two days, I will. My coffee each morning will be in a mug, because it’s hot, but I will use the same one if I have tea later on. So at most, I’ll only be using three drinking vessels per day, but most likely it’ll be even fewer. I think the key to keeping them all clean will be to cut back on lip-sticking stuff like maple syrup and, well, lipstick. 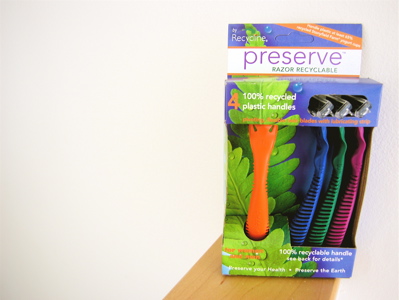 No, this isn’t yesterday’s post being recycled (although that would be somewhat appropriate). I’ve just decided to do a little hair-removal sequel of sorts because I not only invested in new shaving cream but had to get a new razor, too. The one under my sink was — to quote the B-52’s — tin-roof rusted.

So after much success with the Preserve toothbrush — I had a dentist appointment on Monday, by the way, and he didn’t seem to notice any difference, nor did he detect my love affair with natural, fluoride-free toothpaste (I made sure to drink coffee beforehand so as to cover up the smell of tea tree oil and baking soda) — I decided to go for the same brand of razors, which are 100% recycled and recyclable.

I appreciate the bright colours, and it gets the job done, but I miss the swivelling head and triple-blade power of Gilette’s Venus; once I even tried their battery-operated razor, which vibrates (I have no idea how vibrating helps remove hair but it was kinda fun, and horrifying, at the same time). Also, I think something like the razor saver is good in theory, but the idea of spending $12 on such a specific eco-gadget makes me irritable.

Recently, I wrote about how I’m investing in laser hair removal (and blushed the entire post, so the details will not be getting repeated here). But because I can’t afford to get every inch of me zapped, I still need to shave my legs. After a long Canadian winter, the pump mechanism on my old can of shaving cream had succumbed to rigor mortis, which made for a perfect opportunity to toss it — in the recycling bin, of course — and invest in a natural alternative.

I went for the fragrance-free version by Kiss My Face, partly because I hadn’t yet tried any of this brand’s products and was curious to test them out, but mostly because it was the cheapest one on the shelf.

Although it’s not nearly as fun as using the gel stuff that magically turns into foam as you spread it around, it was fine. I can’t quite say whether or not I’d recommend it for more sensitive areas like the face or, well, other sensitive areas. To be honest, my calves are a little too far away for me to care much whether they’re itchy, rashy or stubbly (this logic might also explain why I’m in desperate need of a pedicure).

Punny headline courtesy of the PunGents

Some folks over at President’s Choice sent a goodie bag full of their Green products to my office, with little tags on each one explaining how it was helping the environment. Funnily, they also sent over a press release in the form of a CD, tucked inside an envelope with the words “Paperless Media Kit” stamped on it — yes, on the envelope, which itself was of course made out of paper, albeit 60% recycled.

I couldn’t use any of the garden stuff, nor were the unbleached coffee filters any good because I have a French press, and I wasn’t very interested in the “Active Oxygen” bleach, either, so I gave all that away via Freecycle. What I did take home, however, was a tote bag made from recycled plastic and their signature grocery bin, which serves the same purpose but is sturdier and can hold more.

Then I noticed the Green baking soda.

This intrigued me because I never thought regular baking soda was bad for the environment to begin with, but the Arm & Hammer in the back of my fridge was probably a year old and could do with replacing. Upon further investigation, it appears there’s nothing more eco-friendly about this baking soda than any other — they’re all just sodium bicarbonate — besides the fact that it comes in a box made from 100% post-consumer recycled cardboard. But maybe I’m wrong … am I missing something?

I guess I’ll make the switch and count it, but I’m not expecting a round of applause for this one.

Green as a Thistle
Blog at WordPress.com.
Loading Comments...