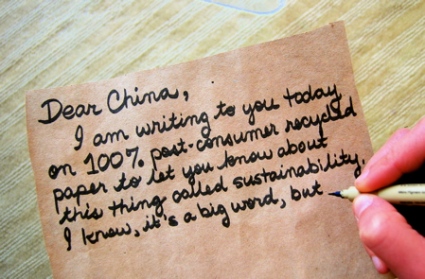 If you go way back to the beginning of this blog and read my second post, you’ll see that one of my friends, upon hearing about this challenge, commented, “You know how you can REALLY help the environment? Start writing letters to China.” So, Craig, that’s exactly what I’m going to do.

All right, maybe instead of China, I’ll start with Environment Minister John Baird. Or even easier: sign this online petition by the Save Our Climate blog, or this one asking Kraft to stop using genetically modified ingredients in their food, or this one to protect the Arctic Refuge.

Or I could even draft my own petition using the Auditor General’s handy guide (complete with flow charts, government jargon and, in case you’re really confused, this example of a typical petitioner: “A northerner who would like to be involved in consultations over harvesting of the forest resource north of 60°” — that is totally me).

Now I have to admit, I’m not much of an activist, at least physically speaking. The thought of draping a heavy, unflattering sandwich board over my shoulders, yelling the same sentence over and over, waving a big sign on which at least one word is spelled incorrectly and marching around Parliament Hill really doesn’t appeal to me. But then I can’t just do nothing and be cynical about it, either.

So my change today is to use the power of the pen — or more accurately keyboard — to voice my concerns. I’m going to make sure that at least once every week I write a letter to someone, sign a petition or join a campaign for a cause I believe in and make my voice heard, no matter how feeble it may be.

This entry was posted on Friday, May 18th, 2007 at 2:43 am and is filed under activism, China, climate change, environment, global warming, media. You can follow any responses to this entry through the RSS 2.0 feed. Both comments and pings are currently closed.