Here in the 416, people who live in houses get green bins. It’s a great program — you put all your food waste, paper towels and other biodegradable stuff into a small container in your kitchen; then when it gets full, you empty that out into the bigger, stinkier green bin outside; then the city picks it up each week and takes it to a composting facility.

Hoorah! Except for one problem: if you live in an apartment, you don’t get a green bin, because city councilors haven’t quite figured out what to do with an entire Trump tower‘s worth of rotting bananas.

Yet. Apparently, they’re on it, and according to my inside source a plan has been drafted along with a pilot project. But even still, the green bins won’t be rolled out to apartments for at least another year. So in the mean time, I thought I’d just go ahead and build my own.

Originally, I was just going to buy a standard composting unit, but after scouring the entire city and finding only industrial-sized plastic monstrosities, usually costing around $100, I accepted the fact that I’d have to do it myself. However, as endless hours of television have taught me, while I may be able to do it, Home Depot sure can help.

And so it was that I found myself dazed and confused, wandering the aisles of the lumber department in a skirt and kitten heels until I was finally approached by a man in an orange apron. His name was Bruce. I explained what I was looking for — and indeed, felt right out of the ads with my hand gestures and a wonky drawing of a box-like shape on my hand — until he squinted, twisted his mouth a bit and suggested I come back at a less busy time so he could really help me.

I did, and eventually he cut all the plywood (from scraps so I wasn’t chopping down more trees) and put everything I needed in a cart. The bin would have to fit on my balcony, and while I knew nothing about composting, I was pretty sure there needed to be ventilation. So we designed a structure with a mesh chicken-wire basket on the inside and a pull-out drawer on the bottom (I know, fancy stuff, eh?). He threw in some hinges and handles, some wheels to roll it outside, and I crammed it all into the trunk of my Zipcar before driving back home.

Staring at the pile of wood, varnish, tools and mesh splayed out across my living room floor made me think one thing, and one thing only:

I immediately made myself a room-temperature gin and tonic, called a friend who called himself a closet handyman, and begged him to come over. We had nothing to go from other than Bruce’s little sketch on the back of an order form and liquid confidence, but somehow, with the Do-It-Yourself gods looking down on us, we assembled what at first looked like a box, then like a more functional sort of box, and eventually like a box that might just be used for composting (see the photo montage below).

I’d saved some food waste and newspaper scrap from the past couple days, so I poured it in along with some special compost soil. Now I just have to get some worms and see what happens! 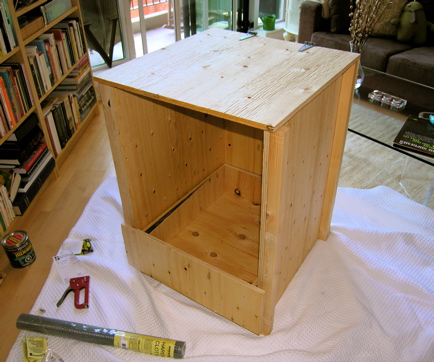 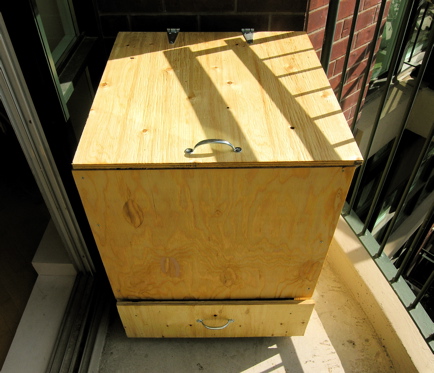 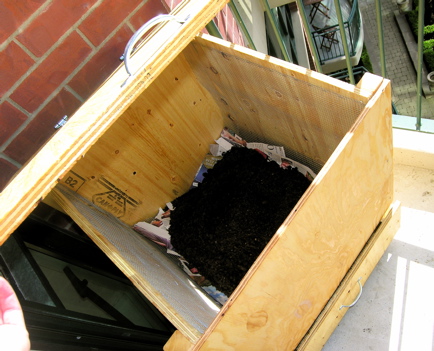 This entry was posted on Monday, July 2nd, 2007 at 8:00 am and is filed under biodegradable, compost, environment, food, gardening, landfill, Toronto, waste. You can follow any responses to this entry through the RSS 2.0 feed. Both comments and pings are currently closed.