An interview with the Diva ladies 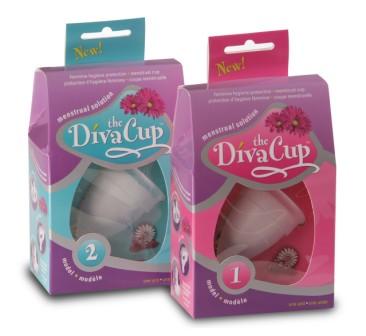 OK, so I finally got around to transcribing my interview with the women behind the Diva Cup, Carinne Chambers and Susan Carskadon. I wasn’t able to ask all of the questions that you insightful readers posed, but the ladies did answer most of them, and pointed out that a lot more information can be found on the website.

Green as a Thistle: How long have menstrual cups been around, and when did you decide to make your own?

Carinne: As early as the 1930s, there were different versions of cups on the market. I had my period on my 13th birthday, and used tampons and pads for a year, but by that point I was already fed up with the results; I had an extremely heavy flow and would be constantly running to the bathroom at school. I tried the cup and thought, ‘Oh my god, it’s not leaking.’ I was just so overjoyed at this concept, and my mother, Francine, felt the same way. As we both began to use the cup, we eventually became very passionate about the whole concept, and after a few years felt there was a real need for a non-latex version. I graduated from school and we began developing a product with the latest technology and materials. There was a lot of energy devoted to it. We relied a lot on other women’s feedback as well as our own experiences. Four years ago, we finally had something we were proud of and that’s the Diva Cup.

Thistle: So what’s the biggest challenge you’ve faced in launching it?

Carinne: The biggest hurdle at the beginning was that, at that time, the environmental movement wasn’t in existence. Everything was disposable. Tampons came out at the same time as menstrual cups and they took off because there was really no concern for the environment. And why would large companies want to sell a reusable product?

Susan: It’s not an easy thing to promote, it involves a lot of aspects.

Carinne: But I think women today are a lot more open. The taboos in those days, I mean, no one talked about that kind of stuff. Even early ads for pads and tampons, it’s just unbelievable how they promoted it. Now is the time for this. Women are finally ready. It’s truly a necessity, and that’s why we’re working day and night to get this concept out there.

Thistle: Did you know about the Museum of Menstruation?

Thistle: So, in my city, I’ve only seen the Diva Cup at natural food and health stores. Is there a reason it’s not in the major drugstores yet?

Carinne: In Canada, we’re in London Drugs, which is out west. We’re planning to go to those bigger stores but it takes a long time. It’s a complex issue getting into places like [Shopper’s Drug Mart or PharmaPlus]. Out product is different, it’s new, and those stores are about turning over kazillions of products. They have to be sure there’s a demand.

Susan: Our clientele is mostly in the natural, environmental or moms and babies types of stores. That’s our obvious market so we have to make sure we cater to them first.

Thistle: The Diva Cup has obvious environmental advantages, but how green is the actual manufacturing process?

Susan: Well, silicone’s a natural substance, and our product can be used for a year or more. We’re looking into some assessments, but the packaging is all recyclable. It’s not printed out on post-consumer recycled paper, we haven’t gone to that point yet, but the actual packaging is very minimal — compare it to any tampon brand and there’s a lot less. We’re a member of Co-Op America, an environmental organization, so we had to go through a screening process to be accepted, and we recycle all the paper we use in the company; we’re honestly not a wasteful company. Even at the manufacturing level, machines are extremely clean, no bi-product waste is created, no oils and lubricants are wasted. Even shipping-wise, instead of sending out every individual product, we send one big bulk shipment out to a distributor in a strategic location and have them disperse it all from there.

Thistle: How strict is the sizing? What if you’ve had children but it was a C-section delivery? Does it matter if you’re using a size 1 or 2?

Carinne: Most women, if they’re approaching 30, really need the model 2. The sizing recommendation used to be just before and after childbirth. But it’s more of a guideline because every woman’s body is different. When I was 27, the model 1 was too small for me all of a sudden — it wasn’t working, I wasn’t getting the seal. Now I use the model 2. There’s only an 8th of an inch difference in diameter.

Thistle: How is the Diva Cup different to its competition, like the Keeper?

Carinne: Our design is patented, we introduced the ridges, and the way the holes are put into the product allows for better release. Silicone is a big thing too; in my opinion it’s the highest quality, it’s medical grade, it bounces back nice and it’s really strong. Finding the right balance is hard. There are a lot of little details. It looks like a simple device but a lot of work went into making it the way it is.

Thistle: How important is it for younger girls to be aware of alternatives like the Diva Cup?

Carinne: We’re trying to work on a project to educate younger women and younger girls. They need to learn about the options out there and understand how the cup works. Some girls as young as nine years old are using it. For athletes, especially — I mean you just can’t do the pad thing when you’re at a swim meet. As well, girls are getting their period a lot younger now, plus it depends on the maturity level. We encourage mothers to talk to their daughters early on and even before they get their periods. It’s a cultural thing, a personal thing, a family thing.

Thistle: Is there a possibility you’d release an even smaller version for younger women?

Susan: The more the company grows, the more we can look into smaller sizes, but it’s very common for women to have this preconceived perception of their size and we can’t predict who thinks what. The model 1 really does work for the majority of women, if it’s used properly. Actually, the vaginal cavity can accommodate a lot, and there are all kinds of variables. At trade shows, some women are like ‘That’s so big!” and then others are like “That’s so small!” so we can’t please everyone.

Thistle: Is there anything else you want to clarify, or let people know about the Diva Cup?

Susan: There are a lot of misconceptions out there and it’s truly alarming to us. I mean, I’ve read online about people boiling the cups and letting them melt and then trying to reshape them. One website had this post about all these women who did that and were asking how to reshape it, and that’s crazy. I just hope women take the time to go to the website and read all the FAQs before they panic or give up on it or do something drastic.

This entry was posted on Friday, November 30th, 2007 at 7:49 pm and is filed under 1. You can follow any responses to this entry through the RSS 2.0 feed. Both comments and pings are currently closed.

5 Responses to An interview with the Diva ladies