Water is the new oil, according to James Bond 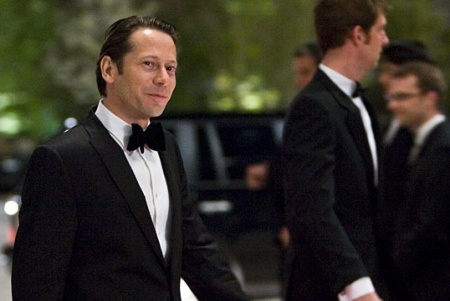 After watching Quantum of Solace (yes, I know, I just effectively outdated this post by mentioning a movie that came out a month ago, but bear with me), I arrived at the following conclusions:

1) Water is the new oil; 2) Eco-villains are the new sinister-eye-patch-wearing-Dr.-Evil-type villains; and 3) As much as I’m a proud Canadian, CSIS spies really have no place in a Bond film.

But back to the first part — as I wrote in my last column for the Post (you can also read the full story below), it really does seem that as private water companies expand, especially into areas like the Global South, we’re going to be talking less about oil barons than water barons; instead of protesting against Texaco, Exxon-Mobil or Shell, activists will be banging at the doors of Suez, Vivendi (renamed Veolia) and Bechtel. To explore this a bit further, I interviewed Maude Barlow… and, well, you can read up on what she had to say at the bottom of this post. In short: She freaked me out almost as much as Al Gore did back in the day with his slides of drowning CGI polar bears.

Part of me wanted to drop everything, infiltrate Veolia headquarters and cut off their water supply to see how they like not being able to make tea or wash their hands after using the bathroom or flush the toilet or just freakin’ hydrate themselves to stay alive. But then Reality knocked on my cubicle and told me to just finish the damn article and go home to my cat.

Still, at the very least, it’s driven me to be even more of a (publicly controlled) tap-water advocate — and with that, I’m going to ask you readers to help me out a bit. In my house, I currently have a carbon filter on the top floor, a Brita jug and filter in the kitchen, a stainless steel container, and this new thing called Zero Water, which is basically like the Brita jug and filter except it comes with a little meter that lets you test how many parts per million of dissolved solids are in there before you take a swig — the company sent it to me and they claim their filter takes out four-times as much as most carbon filters (although I’m still waiting to hear back from them about whether the plastic jug is BPA-free). I can’t do any of those filters that attach directly to the faucet because my faucets aren’t really adaptable to that, unfortunately.

Anyway, I’m planning on doing a bit of a taste test so that I can finally figure out which filter system is a) the most environmentally friendly (as in: Can the filter be recycled? How often does it need to be changed? What kind of packaging does it come with?); and b) produces the best-tasting water. When I come to a conclusion, I’m going to present my research to anyone who insists that bottled water tastes better and challenge them to do a blind taste test (or, if they refuse, hurl a lot of petty insults at them until they feel guilty).

Here’s where I need your help, though: Have you tried out a lot of different tap-water filtering mechanisms? Is there one that you think stands out as a clear winner? Do you think tap water tastes just fine and we should quit complaining about it in the first place? Does is just need to sit for a while and get cold to lose its metallic taste? Does a stainless steel container help or hinder? Comment below!

I’ll update everyone on my taste-testing in the coming week or so.

To most James Bond fans, the villain in Quantum of Solace may come as a surprise – this time, it isn’t some disfigured, revenge-obsessed arms dealer working out of an underground lair in Russia, but rather a plain-looking guy in khakis named Dominic Greene, head of a prominent environmental organization.

What classifies Greene as evil is the fact that he wants to privatize Bolivia’s water supply and subsequently drive up the country’s utility prices – hardly a plot to wipe out all of humankind, but it’s not exactly a nice thing to do, either.

But while he may seem a little benign, Greene nonetheless marks the first true eco-baddie the Bond franchise has seen and personifies a very pressing concern in real life: access to water.

“The thing that’s really frightening in Quantum of Solace is that it’s true,” said Mathieu Amalric, the actor who plays Greene, in an interview with the L.A. Times. “It’s not a big fantasy like in the Bond films of the 1980s.”

Indeed, the plot is loosely based on what happened in 1999, when the U.S.-based firm Bechtel signed a contract to privatize the sale and distribution of water in Cochabamba, Bolivia. Massive protests and a series of organized strikes ultimately returned control of this resource to the local government; however, Bechtel then attempted to sue for some US$50-million in lost profits.

A year before and across the ocean, local councils in South Africa began privatizing water, forcing citizens to pay into a meter system at every well. Those who couldn’t afford it ended up drinking from polluted streams and ponds instead and, by 2002, the country had suffered its worst cholera epidemic in history, one that infected more than 250,000 people.

“What the world needs is a quantum of water justice,” says Maude Barlow, a Canadian activist and senior United Nations advisor on water. “It really is an issue of life or death. It’s bigger than energy, even – oil destroys the environment and companies are stealing it and so on, but no one in the world has to die from a lack of oil. People are dying from lack of water … the crisis is here, and anybody who moves into desperate countries in the Global South to make money by denying water to people who can’t afford it will increasingly be seen as villains.”

Barlow believes that, as we become more environmentally aware, we’ll talk less about oil barons and corporations such as Exxon, Shell and Texaco, and instead focus on water barons and firms such as Suez, Vivendi, Nestlé, Bechtel and Thames Water of England.

In a recent interview on CBC Radio about the future of this industry, an executive with Thames referred to water as the petroleum of the 21st century.

“There will be world wars fought over this in the future,” he said. “Water is a limited, precious resource, so the growth market is always going to be there.”

Gerard Payen, who directed the overseas expansion for Suez, agrees, adding: “Water as a business is very effective when you look at the needs. We purify water and bring this water to your home. We provide a service, it has a cost and somebody has to pay for it.”

Well, yes. But the question is, does someone also have to profit from it?

In a year-long investigation by the International Consortium of Investigative Journalists, it was shown that private water companies have now expanded into every region of the world, with more than 300 million people getting water from a commercial source. As an example of the immense growth rate of these companies: RWE, when it acquired Thames Water (it has since sold it), went from earning about US$25-million in 1990 to US$2.5-billion in 2002.

“You’re starting to see the sale of whole river systems now, too,” Barlow says. “In Canada, there’s tons of interest in exporting our water into the U.S., from northern Manitoba down to Texas, for example. And last month, the Montreal Economic Institute put out a study calling for the export of Quebec’s water to the U.S.”

Daniel Klymchuk, author of Water Exports: The 1% Solution, thinks plans like this aren’t necessarily a bad idea – in fact, he argues that a pipeline from Hudson Bay to the U.S. border exporting 1% of its water would earn the province US$1.33-billion a year and have no effect on the surrounding ecological system, as the flow would be diverted just before it enters the ocean.

“To assume no other province will sell water in the future is an unforgiveable error in judgment,” he writes. “If we do not act soon, we will ultimately price ourselves out of the water market.”

Of course, sitting somewhere in between Barlow and Klymchuk are those who believe in public-private partnerships, where a private corporation provides the infrastructure and technology but the utility itself is still owned by the local government.

It’s a complicated issue, and part of the problem is that the legalities behind water aren’t always clear.

“We don’t have a decent national law – the last water act was passed in 1970 – and we haven’t really mapped out our groundwater,” Barlow says. “We’ve stopped the privatization of water treatment plants across Canada but we haven’t banned the commercial export of water, and there are ongoing fights between communities around the Great Lakes and bottled-water companies like Nestlé.”

As a sign that it’s on top of such issues, Nestlé – which owns Perrier, Vittel, San Pellegrino and other international water brands – has released a video to address any concerns over its sources, how its water is treated, packaged and so on (the website also has a few pages devoted to sustainability and environmental responsibility). Meanwhile, the Coca-Cola company is holding a conference next month to look at the impact of privatization and whether it’s possible to strive for a “water-neutral footprint.”

“Still, the facts are pretty stark when you look at what they’ve done,” Barlow says. “Water barons are smart, persistent and ahead of the curve, so they know a crisis is looming and they’re basically trying to overcome this ‘bad guy’ reputation before it gets even worse.”