A man, a plan: Tim Flannery

Correct me if I’m wrong, but my oenophile eyes and 30/20 vision (for reals, I have crazy-good eyesight) tell me that’s a bottle of Wolfblass in the photo above, nestled carefully in a grassy knoll. Oh, and that guy next to the bottle of wine is Tim Flannery — environmental author extraordinaire. I can confirm that this guy loves his Australian reds, too, because I sat down with him recently in Toronto and he ordered a glass of shiraz, apologizing for the long-distance selection. He then apologized even more when he ordered a plate of steak frites with it, insisting that he rarely eats meat when in North America. I was dubious about these menu selections, but I must say, by the end of our lunch date I was heartily convinced he is a man who cares about the planet and is very engaged in doing something about it.

His new book is called Now or Never, and it’s out in stores now. I scarfed it down in about two hours because he really is that good at conveying all the scientific this-and-that behind global warming to people like me, who can’t even explain why leaves turn red in the fall (I had to ask my mother, who has four science-related degrees and understands how chlorophyll works). He also provides incredibly concrete solutions that pretty much every single politician in every single country should be adopting immediately. Of course, even if you haven’t read Now or Never, you may know Flannery by his previous book, The Weather Makers, which was a best-seller and led to major environmental policy changes in Australia; he also chairs the Copenhagen Climate Council and is promoting the upcoming UN treaty negotiations that start in December, which is very, very soon (um, Harper? Did you hear that? It’s time to get yer ass out of the tar sands and over to Denmark!).

“When you’ve got as complex an issue as climate change, where no one has all the answers,” Flannery told me, “an ongoing dialogue is essential.”

Indeed, Flannery is such a fan of dialogue that he took a remarkably different approach to Now or Never. Rather than simply publish his own views on the challenges of global warming, he invited a handful of critics to respond to his work. In the end, readers get 107 pages of his initial argument, followed by 45 pages of critique from Bill McKibben, Richard Branson, Peter Singer, Fred Krupp and Peter Goldmark, Gwynne Dyer and Alanna Mitchell, with a final reply from the author. The idea was to make the book resemble a 19th-century political tract, at least in format: a concise, pointed essay meant to both enlighten and provoke readers.

“I felt that this was an important book to get out in advance of the Copenhagen meetings,” Flannery said. “Progress is slow right now, and that scares me. I must say, I wake up in the small hours of the night occasionally thinking, ‘What are we going to do on Dec. 19 if we’re faced with a suboptimal outcome?’ ”

He certainly didn’t seem to have high hopes for Canada, either: “This is as bad as a developed country gets… Harper has no friends internationally in this anymore — he used to have [former U.S. president George W.] Bush and [former Australian prime minister John] Howard and they’re gone now, so it’s a real concern … It’s in the government’s interest for the Alberta tar sands to continue, but the rest of the world can’t afford it … The tar sands represent one end of the hydrocarbon spectrum — the really dirty end — and other countries will eventually look at Canada and say, ‘If they, as a wealthy country, can get away with destroying their environment and producing highly polluting petroleum, then why can’t we?’ It’s a corrupting influence on the world.”

Flannery’s words sound harsh, but he also admits there are good things happening here too; part of Now or Never, for instance, looks at an alternative energy system called pyrolysis, of which Vancouver-based firm Dynamotive is one of the world’s leading developers. There are also a number of carbon-neutral or even carbon-positive housing developments being constructed on the West Coast and in Toronto, not to mention countless Canadian environmental NGOs, charities, offsetting organizations, wind and solar companies and more.

“It’s easy to get disillusioned in the West, but the world is moving and there’s still hope,” says Flannery. “Look at what people have done in the banking sector — how we’ve reigned in some of the greediest people in the world and said to them, ‘This isn’t good enough anymore.’ If we can do that for finance, we can do it for greenhouse gases, and we will.”

But what do you think? Is this really achievable, or has Flannery had a few too many glasses of shiraz?

P.S. Exciting news: Green as a Thistle will be in Copenhagen for the first week of the climate negotiations!! Stay tuned for more details on where to find my reports!

Hello! (Waving sheepishly) Apologies for the prolongued absence… there’s this thing called the Toronto International Film Festival that sucks up all my time for two weeks every September, and as soon as this year’s fest ended, I immediately hopped on a plane to Sweden for a week-long sustainable housing tour, which I’m writing about for the Post. Those who’d like to ream me out for flying across the Atlantic, feel free to do so now and move on — after all, Elizabeth Kolbert has already pointed out that I’m a slut who loves to fly, so it should come as no surprise (and yes, I made sure to offset the trip for $23.80 at TerraPass).

Anyway, I won’t go into great detail about my trip because there is simply too much information to convey and, frankly, it’ll probably be overwhelming, if not a little boring. So instead, I’m going to point out some highlights, throw in some photos and conclude with the Single Most Important Lesson I learned while in this country, which is best known as the home of IKEA and Volvo and meatballs.

First highlight: Bike paths. Everyone knows that Scandinavian countries kick ass when it comes to bicycle infrastructure, but it’s quite something to actually see it in action. In Stockholm, bike paths are EVERYWHERE; I honestly could not find a single road that did not have a bike path — and trust me, I tried. What’s interesting, too, is that they run on the sidewalks more often than the street, which makes it safer for the cyclists (although pedestrians have to watch where they’re going). Plus, because it’s Europe, there are no road bikes or mountain bikes; everyone rides those cute upright numbers with Art Deco headlamps, and some of the bicycle paths are even marked with fancy brass inlays. Unfortunately, I don’t have a good photo of this, but here’s what they generally look like: 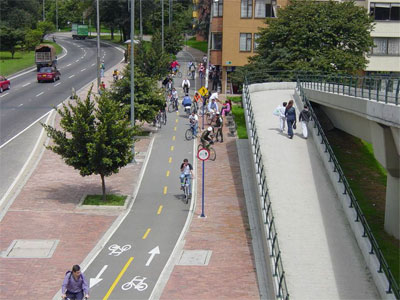 Second highlight: Localised energy and waste management. In Sweden, they take a very holistic approach to environmental do-gooding — so instead of dealing with water, waste and energy separately, effort is made to create systems that combine all these issues at once. Example: In one housing development, there are three pneumatic waste disposal units (one for organic waste, one for paper recycling and one for glass/plastic recycling); you put your low-grade cardboard packaging in the paper hole and shut the door, whereupon it gets sucked through a tube into a nearby sorting and processing facility and, eventually, gets sent with all the other packaging waste that can’t be recycled to a local incinerator, which burns it, sending the heat back into the community to warm up the houses, the water and even sidewalks during winter. The emissions from this process aren’t very toxic because they’re filtered through various scrubbers and cleaning mechanisms before getting released back into the air. Here’s a photo of the units above ground: 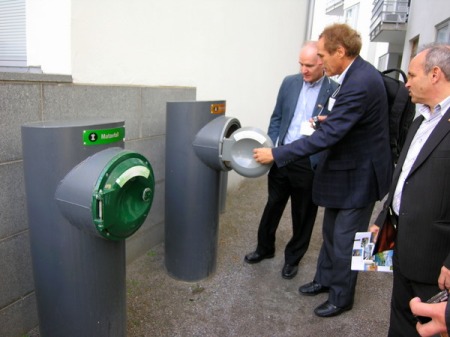 And here’s another photo, showing the underground sorting room, where all the tubes end up (yes, it stinks a bit):

And just how does everyone know which types of cardboard can be recycled and which types have been recycled so many times that they must go into the general garbage hole? Well, here’s the next point:

Third highlight: General public knowledge. According to my friend, who lives in Gothenburg (one of the greenest cities on the planet and home to the Volvo plant, which is accessible by transit and runs entirely on wind energy), most Swedes will easily be able to sort their trash into 11 or 12 different streams, so the waste diversion rates are pretty high. And speaking of Gothenburg, one neat fact about the restaurants here: Most of the patios come with a fleece blanket on the back of every chair, so if you get cold, you can wrap yourself up and there’s less of a demand for heat lamps. Here is my friend, Duncan, in his blanket: 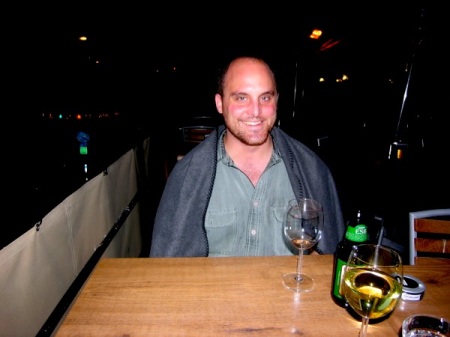 Aside from this, Sweden is chock-full of solar panels:

And it has tons of wind farms:

Here’s proof of just how windy it is by those turbines:

On the flip side, we didn’t see many green roofs during our trip, and while there is a good level of density to the cities, there aren’t many high-rise buildings. In terms of water efficiency, I’m not sure how much greywater technology there is, but I did get to make use of this wicked toilet at an eco-education centre that’s separated into two components: A front bit for #1 and a back part for #2 — the pee is diverted to a treatment plant where it’s turned into natural fertilizer for local farms, and the poop goes into the regular sewage. Take a look: 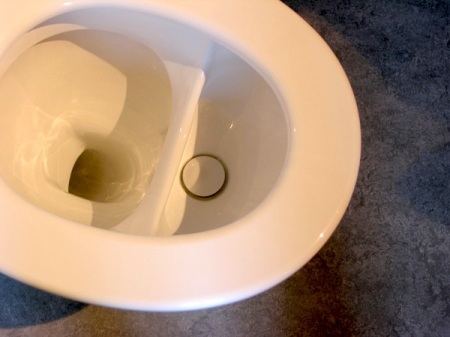 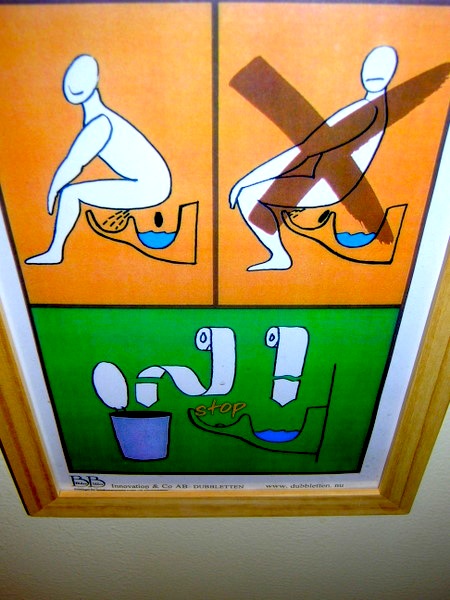 But perhaps the Most Important Lesson I learned was that we really need to start taxing the heck out of ourselves if most of this sustainable infrastructure is to be developed and implemented. The Swedes pay crazy taxes (about half their income), and the majority of these funds are delivered to the municipal governments (which handle things like waste, water and energy). Unfortunately, it’s doubtful that North Americans will ever consent to coughing up this much money to local bureaucrats.

Still, if we start paying more attention to how other cities are addressing climate change — especially when it’s successful and holistic and cost-effective — maybe there’s hope for us yet.