Final Post: As they say in Copenhagen, hej hej

You know when you say goodbye to someone and then you both realize you’ll be walking to the same subway station so you have to do another goodbye five minutes later and it’s kind of awkward? Well, I feel like I’m in that kind of situation, having pretty much said my farewell already.

Still, there are four final blog posts from Copenhagen to share, so here they are, in chronological order:

Friday’s entry, about Bolivians and the necktie-to-keffiyeh ratio is here;

and lastly, here’s the diary entry from Saturday (which is probably the best, seeing as it features some X-rated content).

Here are some photos:

This is Baby, a waste-picker from India. 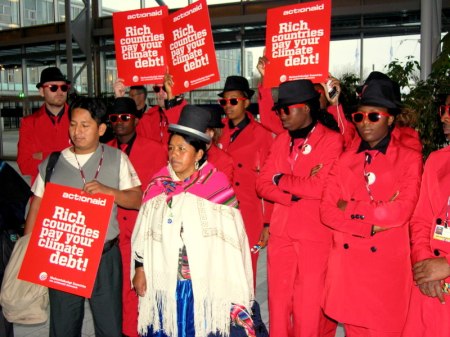 Bolivian protesters at the Bella Center.

A balloon representing a tonne of CO2 outside parliament.

The Greenpeace ship docked at the harbour.

And finally, some quick video footage of protesters dancing (with solar-powered speakers):

In response to criticism about my irreverent tone in these articles, I’m just going to say two things: One, I’ve been doing other, lengthier interviews while here and hope to use the material for more earnest features at a later date, so it’s not as if I’ve come all the way to Copenhagen for the sole purpose of being snarky; and Two, in fairness to the Post, there is a lot of stuff here worth mocking — like the French activist who lingers outside the Bella Center in his skinny jeans with his collage poster that says, “Which climate fraud will you vote for?”, smoking his cigarette and generally adhering to every single French/activist stereotype there is — as well as a lot of people who don’t really need to be here, a lot of paper, plastic and food waste (and chile con carne on the menu? Seriously?), not to mention a series of press conferences and side events that either state the obvious or say nothing new at all about climate change and what we need to do about it.

Anyway, I truly hope something does result from COP15, and I really do love that over 30,000 protesters descended on the local parliament this Saturday to demonstrate (not including those who threw bricks, mind you), which just goes to highlight the sheer volume of people who care about the planet and want to make a difference, even if they aren’t a high-ranking politician with a PhD in environmental science.

So with that, here’s to keeping the enthusiasm alive; please keep reading Crunchy Chicken and Fake Plastic Fish and Arduous and Treehugger and Grist and listening to all the amazing green voices out there who are strengthening this movement each day. If you want to get in touch with me, my contact info is all here. Peace out,

Copenhagen diary entries: Monday and Tuesday; also, Thistle is going off the air!

All right peeps, I’ve gotta be honest with you — I kind of need to bail on this blog. There are so many green bloggers out there who are so much more willing to sit at a computer after a full day’s work and actually write something meaningful; I’m just not one of them. Out of pure selfishness (which I like to disguise as eco-friendliness), I’ve decided to put a concerted effort into unplugging myself from technology as much as possible. I already stare at a screen for eight hours a day and, to be frank, I don’t think my ramblings are worth the bandwidth.

However, I promised I’d report on my time in Copenhagen, so I’m going to follow through with that. The catch is that I’m writing about these climate talks for the National Post, which means that if I don’t eschew earnestness and embrace irreverence (our paper’s mandate), I could get fired. Well, probably not fired, but it would be useless because my editors wouldn’t print anything I filed. In short: my COP15 diary does not include heartfelt and lengthy interviews with people making a difference; it features quips about the Little Mermaid statue.

If you still want to read them, here’s a link to Monday’s story.

And here’s another link to today’s story.

Finally, here’s the introductory piece I wrote when I arrived on Sunday.

I’ll post the others later this week. Please don’t hate me for ending things on a sarcastic note!