I just wanted to pop up into your RSS feed/inbox/Google search/etc. for two reasons, which are completely unrelated other than a tenuous connection to Christmas. One is this: I decided to make some from-scratch holiday gifts this year, hoping to save money and maybe impress my friends and family a bit. I’m knitting a scarf, but it’s taken me months and the yarn isn’t cheap; I made some cinnamon-hazelnut pear butter and a few soups and jams, too, but I was looking for something different. Finally, I decided I was going to make my own moisturizer. Full disclosure: This was also for my own benefit, because as content as I am to refill my all-natural body lotion at the Big Carrot and use jojoba and coconut oil for the drier months, I was really missing those thick body creams. Also, the weird rashy business around my eyes was coming back and it doesn’t respond well to straight-up oils.

Sooo… into the kitchen I went! I decided to start with some of the ingredients Meghan recommends in her Natural Body Care e-Tutorial — this is totally worth downloading, by the way; not just because I’m friends with her, but because it’s incredibly thorough, 100% healthy and eco-friendly — but of course, as Meghan herself always does, I veered slightly off-course from the official recipe. Here’s the thing I learned with natural moisturizers: EMULSIFIERS ARE KEY. This sounds like an evil toxic word, but it basically just refers to a type of wax that binds water and oil, which you need to do when you’re making these products, unless you want a very thick paste that melts into a rather oily substance when you rub it in (which is fine, for winter, but a bit much for the warmer seasons… it also means you’re not saving much money — the whole thing with adding water is that it stretches the product out more).

Now, some people claim that beeswax is an emulsifier… this may be so, but in all my attempts to use it, the water and oil never really blended together. Finally, I ordered some plant/vegetable-based emulsifying wax from Mountain Rose Herbs (AMAZING site, fyi) — you can find their waxes here — and tried it out. Result: PERFECT MOISTURIZER! So I bought some spice tins, some cute labels and presto — original Christmas gift accomplished. Here’s what one of the tins and moisturizer looks like: 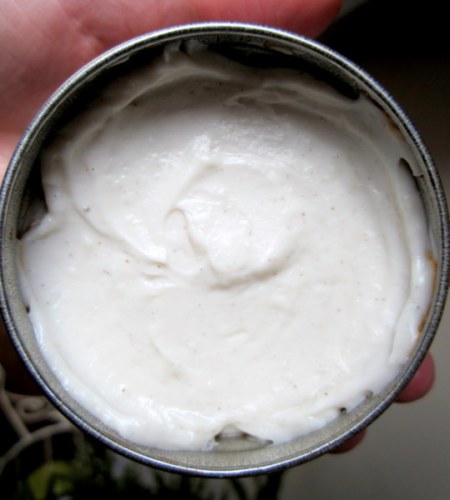 I’m still fiddling a bit with the proportions of oils, wax, water and so forth, but I’m so happy with the final product. It goes on thick and creamy, smells delicious and actually keep my skin moist. It even cured the redness around my eyes!

Vanilla-bean and toasted marshmallow moisturizer (note: there are no marshmallows in here; it just smells like ’em!)

Another note: The vanilla beans are totally optional (mostly, they just lead to more “ooohs” and “aaahhhs” upon opening). You can also switch up the apricot kernel oil for another carrier oil like jojoba or almond oil, or just use more coconut oil. Beeswax can also be left out, but it adds a nice sweetness, I find.

– Using a double-boiler on medium-high heat (a bowl over a pot of boiling water, as you would when melting chocolate), melt the cocoa butter, beeswax, coconut oil, apricot kernel oil and emulsifying wax.
– When all is melted, gradually pour in the filtered water while whisking the mixture, either quickly by hand or with an electric blender. Remember that this solution will get thicker when it cools, so add enough water that it’s slightly more liquid than you want.
– Remove from heat, then add vitamin E, vanilla extract and vanilla beans, stirring until blended.
– Let cool for a few hours and scoop into sterilized pots.

That’s it! Enjoy! Now, onto other green Christmas goodness: My dear friend Mark Leiren-Young, a fellow film critic and environmental author (how often do those two professional roles coincide?) has created a couple of short videos that explore the un-green side of Christmas. What I like about Mark is that he understands why we need to maintain a good sense of humour in the face of depressing eco-stats. So here are the vids (starring his daughter) — watch, smile, and pass along to your pals!

This entry was posted on Monday, December 20th, 2010 at 6:04 pm and is filed under Uncategorized. You can follow any responses to this entry through the RSS 2.0 feed. Both comments and pings are currently closed.