That was supposed to be a Marie Antoinette pun. Well, not a pun, exactly, but you know, “Let them eat cake” — oh, forget it, I can never come up with decent headlines. Anyway, moving on: I thought I’d continue with yesterday’s fast-food theme.

After eliminating all delivered food from my menu — in some part because of the packaging in which it always arrives but mostly because of the fuel involved in getting it to my front door — I’ve decided to go the extra step and ban take-out food altogether, unless I’m able to bring my own reusable containers or wrapping to store it.

So, basically, the only way I can now eat fast food is if it’s vegetarian, if I walk or bicycle to get it, and if I plan ahead and bring all my own plates and cutlery. The one other exception will be if I’m out all day unexpectedly for work and haven’t been able to make my own lunch, in which case I’ll try to find something I can eat in-hand — and if it’s something messy like a falafel, I might need to allow myself a single piece of wax paper (I shouldn’t need to use any napkins, though, because I’ll have my hankie — which I’ll only use if it’s relatively clean, of course).

Phew! I think it’ll be easier to just make my own damn pizza. Oh wait, I can’t use my oven. Crap.

Bag it Back is the latest recycling campaign for all of us winos (sorry, oenophiles) in Toronto. Essentially, the LCeeb is like that annoying roommate you had who never did the dishes, and would sooner pay you to do them than turn off The Price is Right and get his lazy ass of the couch. Because most wine bottles haven’t been getting properly recycled through the blue box program (and we’re getting told this … now?) they’re asking us to grab a plastic bag and bring the bottles back — no, not back to them, back to those guys over there with the hemp badges sewn onto their backpacks, aka The Beer Store, who’ll give us a return.

So today, I collected the bottles that had been sitting next to my blue box, put them in a tote bag and walked down the street, past the LCBO, to return them. I’ll keep tote-bagging it back, but don’t think there won’t be a scowl on my face and a chip on my shoulder in the process.

Everybody’s walking for the weekend (Day 30)… 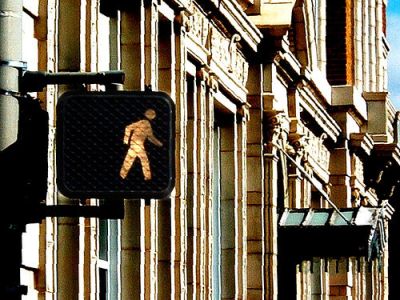 Well, at least I am — or riding my bike, or taking public transit — because from now on I’m leaving my car parked in the garage on weekends, from when I wake up on Saturday until I go to sleep on Sunday (so if I happen to sleep-drive at 4 a.m. Monday morning, that is totally acceptable!).

Here’s the part where everyone leaves comments like, “You know what you should really do? GET RID OF THE DAMN CAR!”). I’ve considered this, and it might be a possibility in the future, but because it takes me an hour and a half to take transit to work (streetcar, then train, then bus, then walking — it’s not my fault, it’s the office that’s in the boonies) and it takes me almost two hours to bike (I tried last summer and had to shower three times that day), yet just 20 minutes to drive, I need the car for work.

On the weekend, however, especially now that it’s Spring, leaving the car behind shouldn’t be that big of an issue. Even if I’m getting groceries over at the St. Lawrence Market or going out for a drink at night up in the Annex, I think I can manage with two feet and two wheels. Of course, like many of my green changes, I’m sure that come February of next year I’ll be crying into my homemade compost bin about it.