I love Google, I really do. Along with Wikipedia, CuteOverload, Go Fug Yourself and The Website That Shall Not Be Named, I probably type its URL into my browser at least 50 times a day (bear in mind I’m also journalist, so it’s usually either a vanity Google or for research… and yes, sadly, journalistic research these days often consists of nothing more than a two-second online search). I also love Google Earth and Google Maps.

But I don’t get Gmail. Everyone loooooves Gmail and I truly can’t figure out why. I have three email accounts — one is my work mail, which is Outlook-based, another is my personal email with Yahoo!, and then there’s my blog email, which is at a Gmail address — and while I do like me a little G-chat every now and then, I don’t find the whole thing very user-friendly. The “compose” button is in a weird place, the options are difficult to find and organize, and a crapload of Spam always gets through.

Although I keep my other two accounts nice and organized, deleting things regularly, I’ve let my Gmail account go out of frustration and lack of patience. However, when my lovely assistant Eva pointed me in the direction of this Treehugger story on the energy that’s apparently required to save all these useless emails, I started to feel guilty.

The evidence for exactly how much energy is still a bit soft, but I figure it’s always greener to be minimalistic, so I’m going to spend part of today clearing out my Gmail inbox. So nobody email me in the next two hours!

I was sitting here this morning, thinking, “OK, I need a Simple Saturday change, what could I possibly do that’s easy?” Of course nothing came to mind because at this point I’ve done pretty much everything short of inhaling my own exhale and subsisting on a diet of snow.

But then — then! — something occurred to me that was so obvious, so easy, I couldn’t believe I hadn’t already done it: rechargeable batteries.

I’ve made a point already of recycling or properly disposing of my batteries, but using rechargeable ones had been on the back burner for a while, and eventually I just plain forgot about it.

I think the reason it was on the back burner to begin with was that my experience with them has never been great. They often lose their efficiency, to the point where you need to charge the things after just a few hours’ use, and then on top of that there are so many brands on the market, it’s hard to know which type to get.

This website here explains a lot — differentiating between NiMH (Nickel Metal Hydride) and Li-Ion (Lithium-ion, for digital cameras), then offering breakdowns of all the brands, chargers, solar options, etc. The kind I see most often in store are these GP ones, which can apparently recharge a thousand times. I can’t think of anything I’d actually need to use a thousand times, so that should be good enough.

I’ll probably get those today when I’m at Grassroots, but then I’ll need to also decide on which charging apparatus to get. Part of me wants to splurge on a solar doohickey, but then this standard universal one looks pretty decent, too. Anyone got any recommendations?

Ever since Bullfrog Power landed in Toronto, I’ve been DYING to sign up. Living in a condo with standard monthly fees and shared energy bills meant it wasn’t an option, but as soon as I signed the deal on the house, I was like a kid sitting in front of my Christmas presents, waiting for mom and dad to wake up already so I could start tearing into them. All I could think about for weeks was the day I’d finally be able to pick up the phone, call Hydro to set up my account and then log onto Bullfrogpower.com so they could start putting some more wind turbines to good use.

That day, my friends, was today.

What I love about Bullfrog is that it’s not just about offsetting. As they explain here, users continue to draw power from the Ontario grid, but Bullfrog then injects that same amount of energy — in the form of wind power and low-impact water power — back into the system to compensate.

All of their generation facilities have met the environmental criteria of Environment Canada’s EcoLogo certification process, and they publish their green power audit on an annual basis so you can check up on them.

From what I’ve heard, most Bullfrog users don’t end up paying more than $5 or $10 extra per month for this service — but maybe my parents could chip in here, seeing as I made them switch over months ago!

Unngggghh. Today is not a good day, fellow Thistlers. Last night, I ended up cooking a rather late dinner of quinoa and steamed collard greens (local, organic … do I even need to point this out?) with olive oil and toasted pumpkin seeds, followed by some stress for dessert, after which I promptly hit the sack. Now, because I’m susceptible to tummy cramps — specifically, tummy cramps that feel as though some demented clown has made a balloon animal out of my intestines — I thought to myself, “Hmm, I just consumed a lot of roughage, got stressed and am now in a horizontal position; perhaps this is not the wisest decision.” So before falling asleep, I took some time to massage my tum, helping things move along.

Yeah, well, come 3:30 a.m., I get woken up by excruciating pain in my mid-section. It feels like a collard green alien is going to burst out of my stomach and start attacking my face. I have no idea if the massage made it worse or just made it come on sooner, but either way, I was up for the next four hours, pacing back and forth, alternating between a hot water bottle and moans of desperation, between sips of chamomile tea and dry heaving. It was lovely, to say the least.

I’m feeling more or less all right now — the bagel with cheddar cheese I just ate is making a much better impression on my bowels than the quinoa and greens (sorry, Meg, I know how you loathe gluten and dairy, but maybe my British genes are just wired this way).

What the eff does this have to do with today’s change, you ask? Well, nothing really, but here’s a bit of a tie-in: While I was cooking dinner last night on my stove, I had to use two elements. Automatically I put the frying pan and pot on the two front burners — the right one is small, the left one is bigger — but then I realized it would save more energy to use the second small burner at the back of the stove instead. Yes, it would require a bit more reaching, but the pan would surely get just as hot as it would on the larger element, and according to Green is Sexy, this could save up to 40% of the energy required.

I’m also going to make sure I keep the surface of the stove clean (it’s glass-top), so there won’t be any crusty collard remnants getting in between the heat source and the bottom of the pan.

I have very fond childhood memories of my father waking me up on cold winter mornings, helping me into my snowpants and puffy jacket and driving me up to Mount St. Louis/Moonstone, two ski hills (and by “hills” I mean bumps, really) an hour and a half’s drive north of Toronto, in Barrie.

I remember that cold, damp rental area where we’d get fitted for boots, skis and poles, the collection of lift tickets I’d amass on my zipper and wear like a badge of honour to school, and the Snickers bar my dad would buy for me (he always got a Mars bar) for the drive back home.

These aspects of skiing are less than green, of course — making snow requires tons of energy, as does running a lift or even those dreaded T-bars, and the drive there and back emits even more carbon dioxide.

So from now on, I’ll be cross-country skiing and show-shoeing only, preferably as close to home as possible.

Photo of a desolate chairlift courtesy of dooda on Flickr 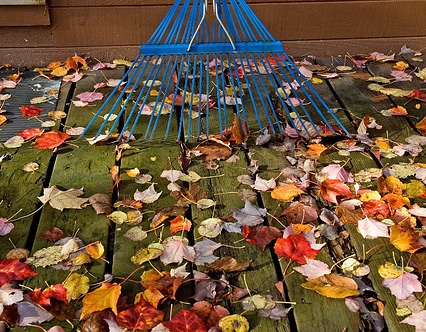 People always write to me with such great suggestions for ways I can green my home: Install solar panels, build a green roof, construct a rainwater collecting system, change my energy provider, etc. Sadly, I live in a condo, and the condo board has regulations that prevent me from doing this (though, to be honest, I’m also too broke to do most it, too).

But that doesn’t mean my friends and family can’t take the initiative. And over the past few months, I’ve found myself convincing others to do all sorts of things I can’t, like raking leaves instead of using a gas-powered leaf blower or getting a green audit done on a new house to see where energy can be saved. It’s also just as rewarding when I inspire others — or bug them repeatedly — to do easy stuff like carrying a foldable tote bag with them to the grocery store or not using paper towels in public washrooms.

See, it’s all about delegating (to use a classic managerial term). So from now on, I’m going to do my utmost to convince those around me to take the plunge and get rid of their car, or build an herb garden instead of a pool in their backyard, or even try going vegetarian for a while — because while every green deed counts, it counts a whole lot more when a bunch of people are doing it. Now you better all join me and start constructing your own compost bins from scratch! Come on, get to it!

Fellow green blogerette Marcie Kahler-Davis sent me an email today pointing me in the direction of this nifty site called Free Rice. For vocab nerds like me, it’s TOTALLY addictive — with every word definition you get right, 10 grains of rice are donated through the UN to help conquer world hunger (I got to a top score of 40, and gave over 1,000 grains of rice… if it weren’t for stupid “manse” I probably could’ve gotten 41).

It’s just one of the many games out there that serve a purpose beyond entertainment. But even if all you’re looking for is some distraction on a Sunday afternoon, the most eco-friendly way to go is a board game with minimal packaging (I love Scrabble, natch) and preferably no batteries required, rather than some high-tech, multi-component, energy-sucking thing like, say, Scene It.

So from now on, whenever I play a game, it’s gotta be green-friendly — or else I won’t be game at all.