All my fellow Torontonians, please note: Our fair city now recycles plastic bags and Styrofoam! While this doesn’t exactly mean you can forget about tote bags and coffee thermoses, it does mean that when you screw up, you’ll be hurting Mother Earth a little less… kind of like slapping her across the face rather than punching her in the gut. 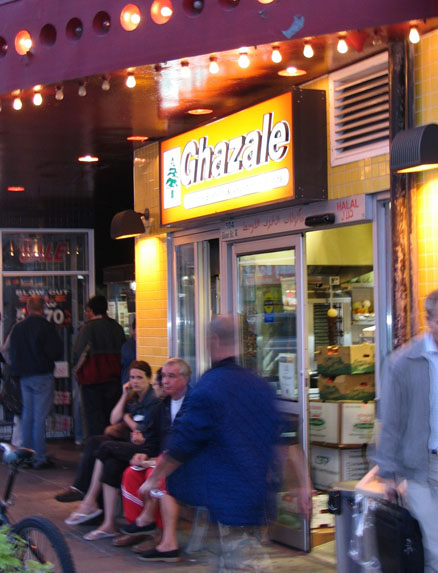 In the little “About” sidebar on this page, I mention an anti-styrofoam party I went to some months ago. It was in support of NaturoPack, an advocacy group which promotes the sale of biodegradable packaging made from corn, an alternative to polystyrene gradually being adopted by some takeout restaurants in Toronto. But just as much credit — or perhaps more, really — should go to GreenShift, the local organization actually facilitating such switch-overs and helping companies green themselves, whether it’s through takeout containers or a full environmental audit.

Restaurants like Ghazale, which has the best falafel in the city (a title that used to be held by Akram’s in Kensington — his secret to the crunch of the balls was that he didn’t actually use any chick peas but rather a blend of less oil-absorbing beans — until he started skimping on the tabbouleh), have signed up to GreenShift, as have upscale establishments like Kalendar and Le Paradis, plus the usual suspects (veggie restos like Urban Herbivore, Fressen and Fresh, which will give you 15% off your bill when you bring your own Tupperware), cafés like Poor John’s and my personal fave Café Taste, which doesn’t actually offer any takeout except in reusable containers (if you don’t have any, the owner will give you some of his to bring back… also, on a completely unrelated note, you’ve gotta love their Free Film Sundays, especially with this lineup: The Tobacco Conspiracy, Global Warming, Our Times and The Last Mogul).

So from now on, whenever I eat out, I’m going to support local restaurants that serve organic food and have GreenShifted their ways.